Gordon W. Smith has long been known to historians of northern Canada for his ground-breaking work in the 1960s on Canada and arctic sovereignty. In the years that followed, he devoted his time and his impressive research skills to a comprehensive study that would cover every possible aspect of the subject from 1870 up to his own day.

Smith produced a lengthy manuscript fairly early on in the process, then spent over two decades carrying out additional research, often gaining privileged access to closed government files. Sadly, however, he never either completely finished the manuscript or incorporated most of his new findings into it. His massive work, thousands of handwritten pages long, remained unready for publication at the time of his death in 2000.

Even though it’s abridged, the edited version runs to nearly 500 pages! An electronic version is available free of charge on the University of Calgary Press website. In an era when academic books can bear substantial price tags, many thanks are due to those who made this possible.

One of us (Janice) had the opportunity to review the publication.

As she mentions, during our research for Acts of Occupation, we came across correspondence between Smith and Arctic geographer Trevor Lloyd, whose papers in the Trent University Archives contain many copied documents on the sovereignty scare created by Vilhjalmur Stefansson. In 1920, Stefansson told Canadian officials that there was a Danish plot to take over some of Canada’s Arctic islands. According to Stefansson, the Danish explorer Knud Rasmussen was pretending to have scientific motives, when in fact he planned to colonize uninhabited Canadian islands with Greenlanders.

Lloyd read Smith’s draft manuscript in 1974. Smith accepted Stefansson’s story as true, but Lloyd had already done extensive research in Danish archives and in the files of the British Foreign Office. His findings proved that there never was any Danish plot, so he convinced Smith to change his analysis of this episode.

We’re happy to take this opportunity to highlight Lloyd’s research and his contribution to Smith’s work. Here are links to an obituary of Lloyd and a photo of him receiving the Hans Egede Medal from Prince Henrik of Denmark in 1984.

Acts of Occupation looks at a fascinating period between 1918 and 1925, when the age of heroic Arctic exploration was coming to an end and the cautious work of federal bureaucrats to establish Canada’s policy on Arctic sovereignty was just beginning. Personalities such as explorer Vilhjalmur Stefansson — a ruthlessly ambitious adventurer with a talent for self-promotion — wrangled with stodgy civil servants like J.B. Harkin, Canada’s first parks commissioner, who regarded the Arctic as part of his domain and thus positioned himself as a player in foreign policy.

This is a joint review, along with Peter Pigott’s From Far and Wide: A Complete History of Canada’s Arctic Sovereignty. You can read the review on the magazine’s website.

Back in August 2011, Postmedia News’ Randy Boswell wrote an article about the book, which we’re sharing with you now, through Nunatsiaq Online:

A new book about the history of Canada’s territorial claims in the Arctic has shed fresh light on the impressive, behind-the-scenes manoeuvring by Canadian officials in the 1920s to secure control over the vast region and its untapped resources — a key part of the current Conservative government’s vision of Canada’s economic future.

Peter Kikkert reviewed Acts of Occupation in the December 2011 issue of Arctic:

Despite these minor shortcomings, this well-written and readable work deserves a place on the bookshelves of historians, students, and popular readers interested in the Canadian Arctic. High-quality photographs and maps add to the story of adventure, exploration, and intrigue that the authors set out to tell. Moreover, this history is both timely and important. The recent flurry of books on the Canadian North has included several broad and sweeping studies of Canada’s Arctic policy, notably Polar Imperative by Shelagh Grant (2010) and Arctic Front by Ken Coates et al. (2010); however, more detailed works that fully explore the contours of Canada’s Arctic policy are required. Other historians should follow the lead of Cavell and Noakes to describe the progression of Canada’s policy since the country received its Arctic Archipelago in 1880 because many historical policy issues are still germane to debates about the Arctic today.

Much recommends the book. Cavell and Noakes conducted thorough research, digging deep in multiple archival holdings. Because of the narrow time examined, they could follow every lead to its conclusion, often through multiple layers of archives and deliberate misdirections by the cast of characters. Also, Acts of Occupation is a well-written narrative that takes what might have been a dull account of bureaucratic and political wrangling and turns it into an exciting and significant book. 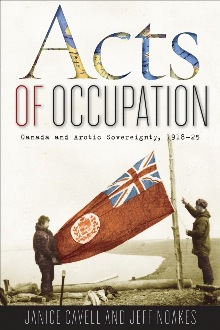